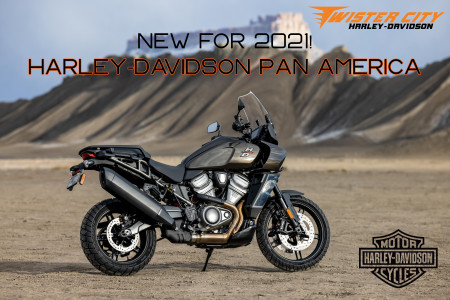 Though technically not the "first" off-road capable bike Harley-Davidson®  has ever offered, the new 2021 Pan America is the first Adventure Touring model designed straight from the drawing board to the production line to wear the Bar & Shield. Have there been other models over the years that Harley-Davidson marketed as dual-purpose, enduro, or off-road bikes? Indeed, there have been several. But the Pan America is the first model intentionally created from scratch to dominate the ADV segment.

I'm not going to list all of the specs, features, and jargon in this post. There are some great articles linked below that cover that stuff. The point of this article is to cover the top 7 reasons why the Harley-Davidson Pan America is the ultimate motorcycle for ALL of Kansas roads, regardless of their surface.

While you're reading, listen in on our 1st Week Review phone call with Michael D., Twister City Harley-Davidson's first Pan America buyer, recorded one week after he took delivery.

1: Accessibility- Within 15 minutes of Twister City Harley-Davidson, you can leave Wichita and be on some fantastic gravel and dirt roads that will take you to places you've likely never seen before!

2: Versatility - In addition to giving access to various riding destinations, the Pan America is easily customized to your individual riding preferences and needs. It has five different road modes, including two specifically for off-road conditions that maximize your traction and confidence as a rider. On pavement, the Pan America is a rocketship! Multiple buyers have commented that despite being an "Adventure" bike, the Pan America is the fastest, most exhilarating, and responsive bike they've ever ridden on the street! It truly is the best of both worlds and opens up access to brand-new rides to places previously off-limits. With advanced Cornering Rider Safety Enhancements, this adventure touring titan provides electronic stability, traction, and braking enhancements to maximize control in various riding conditions.

3: Comfort - Despite its utilitarian, two-wheel-multitool appearance, riders have universally praised how comfortable the Pan America is to ride, even on extraordinarily long rides. Furthermore, the Pan America Special is offered with an optional industry-first ADAPTIVE RIDE HEIGHT adjustment. Amazingly, the seat height automatically lowers when decelerating to a stop and raises when accelerating. This feature alone opens up the customer pool to riders who have been uncomfortable with the tall seat heights typically associated with Adventure bikes. With an optional low seat and automatic ride height adjustment, the Harley-Davidson Pan America is the most comfortable adventure touring bike ever made for small to average-sized riders. With cruise control and the advanced ABS/RDRS-based traction control system, riders can ride far, ride fast, and ride in any condition mother nature can throw at them while feeling good doing it! The windscreen has a slick one-hand height adjustment that really works! At highway speed, it does a surprisingly great job of directing airflow right over your helmet.

4: Performance - 150HP! Let's just say the bike can go as fast or faster than 98% of its riders will ever want to go! Torque is outstanding at over 94 ft-lbs. Words used to describe acceleration: "Crazy fast!" "Scary fast!" "Super quick!". Terms used to describe power: "Unstoppable", "2-wheeled Jeep", and "Mule".

5: Looks - This is subjective, but the folks we've talked to love the look of the Harley-Davidson Pan America! Instead of the insect-eye look of the major competitors in this segment, the Pan America looks like a H-D ADV bike should look - a freakin' beast, not an insect! There's more to appearances than meets the eye. For example, the headlight not only looks cool, it's also got the DAYMAKER ADAPTIVE HEADLIGHT that functions similarly to H-D's top touring bikes. Meaning bright LED light is broadcast on the road far in front of where you're heading - that means into the curve. The engine is undeniable Harley, but you may be surprised to know the Revolution Max®  1250 is also a structural member of the frame. This not only looks awesome, but it reduces weight and increases rigidity for maximum handling.

6: Customizability - The Pan America may be an adventure bike, but it is still a Harley-Davidson! That means there is no shortage of options to customize it and make it your own. Besides performance upgrades like a new set of pipes, there are many bags, cargo boxes, seats, etc., available depending on how and where you plan to ride.

7: Price - For the money, the Pan America is the best value adventure motorcycle currently on the market - the MSRP is as low as $17,319!  Factoring in all of the performance characteristics, included options, the unparalleled HDMC dealer service network, and comfort features, there simply is no better value ADV bike available! To top it all off, it is AMERICAN-MADE, by AMERICA's favorite motorcycle company!

JOIN the Twister City Harley-Davidson Pan America Notification List (below) to be among the first to know about future deliveries, demo ride opportunities, and other Pan America or Kansas Adventure Motorcycle News.

For further reading, check out these articles at ADVPulse, SuperBike, and Adventure Rider.